Australian investors cooled their appetite for equity funds in the second quarter, after six months of record buying, according to the latest quarterly Fund Flow Index (FFI) from Calastone.

Between April and June, inflows to equity funds fell by a fifth (-19.7%) compared to the first quarter of the year and were more than two fifths lower than the net amount of capital added in the fourth quarter. 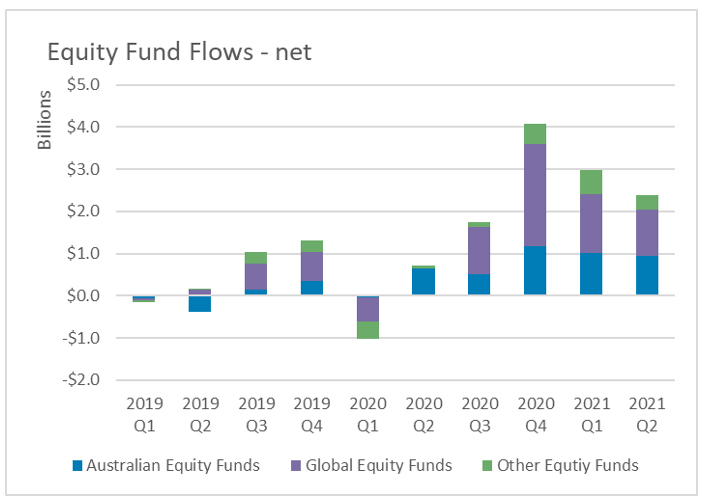 Despite this decline, the A$2.4bn net inflow was still high, around double the average quarterly total since early 2019 and was more than more than three times higher than the same period in 2020. Calastone’s FFI:Equities in Q2 registered 56.4[1], meaning that for every A$1 of sell orders, Australians bought A$1.29. This is a solid reading compared to investors elsewhere around the world for a large asset class like equities, continuing a trend of greater confidence in equities among Australians than their international counterparts.

Initially, the slowdown in buying affected funds focused on overseas equities, but the picture changed as the quarter progressed

Over the whole three-month period, net buying of funds focused on Australian equities held up better than most other geographical flavours of equity fund, at least initially. Inflows dropped by just 6% quarter-on-quarter to A$942m, taking the FFI: Australian Equities down to 57.6 for the quarter, its lowest since Q3 2020. Global funds saw inflows drop by more than a fifth (-21%), while regionally-focused funds saw inflows fall by two fifths (-40%). This last category was led lower by emerging markets funds, as a stronger US dollar dampened appetite for emerging market assets and infection rates in many emerging-market countries jumped.

By the end of Q2, appetite for Australian assets had dropped markedly, while lower risk bonds rose in favour

Nevertheless, as the quarter progressed, net buying of Australia-focused funds weakened with each passing month, while interest in funds focused overseas began to strengthen again. In June, net inflows to equity funds focused on Australian stocks had almost halved compared to March, driven by sharply increased selling activity rather than a fall in buy orders – sell orders reached a record A$959m in June, while buying held steady. By contrast, having dropped significantly in the first few weeks of the second quarter, net inflows to funds focused on overseas equities were back in line with the average over last year by June.

The loss of momentum for Australian assets was apparent in real estate funds too, which are mostly domestically focused. Inflows fell to A$115m in June, their lowest level in 11 months, and more than a third lower (-36%) than the average since July last year.

A 42% quarter-on-quarter jump in net flows of capital to fixed income funds in the second quarter (to a total A$2.2bn) is a further indication of a more cautious approach.

Ross Fox, Head of Australia and New Zealand at Calastone said: “It appears that nerves about the delta variant of Covid-19 initially caused Australian investors to cut back on buying overseas-focused funds in Q2. But the outbreaks at home that prompted renewed lockdowns have progressively dampened appetite among Australian investors for Australian assets over the last three months. Across the developed world vaccination programmes have forged ahead in most cases far more quickly than ours has here. Having dodged the bullet in 2020, Australia is a sitting duck if infections take off before our vaccination rates catch up with our peers elsewhere. This has given investors pause for thought, evidenced by record sell orders in June. Given the benefits of diversification offered by global funds, it makes sense for Australians to spread their bets a bit.”

PODCAST: Mark Todd – Head of Fixed Income at Bank of...