With bond investors grappling with the prospects of stronger growth and higher inflation in the first quarter of 2021, Stein said the result was the most volatile quarter since the onset of the pandemic a year ago.

He said the the ICE/BofA MOVE Index, which tracks fixed-income volatility based on options prices, spiked from an average of 48 in 4Q20 to over 75 in mid February.

“I believe the rise in real yields has been a big driver in the sell-off in some risk assets, characterised by extreme valuations and momentum, like biotech and solar energy stocks, and cryptocurrencies.

“Emerging markets (EM) currencies don’t fit in those categories, but still sold off in the first quarter. That slide stemmed mostly from the U.S. dollar’s strength, which, like rising real yields, is a sign the market believes the U.S. growth story.

“A cyclical rebound is also reflected in the rotation from growth to value stocks, continuing tight credit spreads, higher commodity prices and the steepening U.S. yield curve. The markets also appear to believe that most inflationary pressures are near term, mostly due to an economy growing from a smaller base and disrupted supply chains.

“On paper, we’re seeing a divergence between the U.S. Federal Reserve and the markets on the prospect for rate hikes.  At the March 17 meeting of the Federal Open Market Committee (FOMC), the Fed said it expects inflation to exceed its 2% target in 2021 and 2023, but 11 of 18 FOMC members expect no change to the federal funds rate through the end of 2023.

“The market, however, is predicting two rate hikes by the end of 2023. But the Fed has not pushed back against market predictions in any of its statements, unlike other central banks, and I believe this signals a shift to a slightly tighter monetary policy. Despite improving fundamentals, there are plenty of signs of “froth” the Fed undoubtedly is taking note of, like the GameStop episode, Robinhood trading and the Archegos hedge fund collapse.

“There are other cautionary signs as well. One could argue that concern over the inflationary impact of the tremendous U.S. fiscal and monetary stimulus has restrained the dollar from rising even more. And if the dollar resumes weakening as it did during the latter part of 2020, that could add additional U.S. inflation pressures.

“I believe the cyclical recovery is intact and that risk assets like noninvestment-grade credit and EM currencies can still perform well in a rising rate market, if volatility continues to stabilise.

“But higher inflation remains a “tail risk” that market pricing may not fully reflect.” 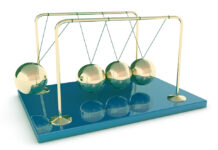