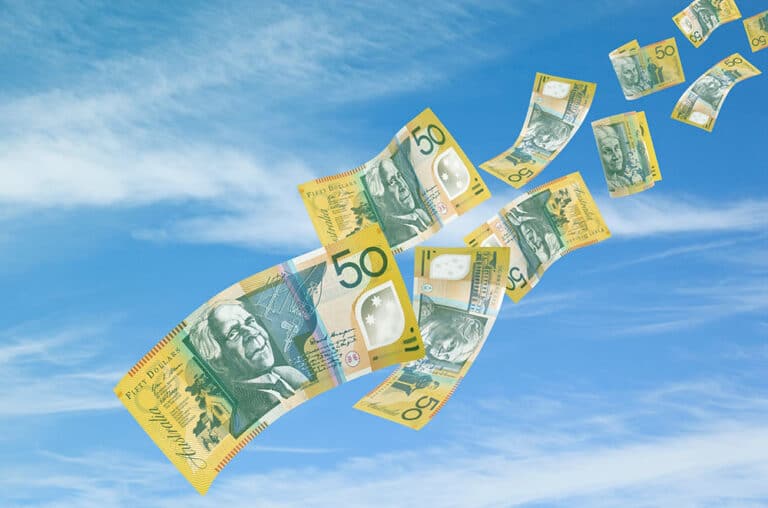 Last week we saw the Australian government come out with a massive stimulus package that will push Australia’s net debt to almost $1 trillion as it fights to protect jobs and the economy.  If we turn our attention to the US, it looks like agreement between the democrats and republicans on the next iteration of fiscal stimulus won’t be happening anytime soon.  But if it does happen, there will be implications for the global bond market. Global fiscal stimulus, which in aggregate is of a magnitude that is unprecedented outside wartime, means governments need to borrow more money by issuing lots and lots of new bonds.

Investors have become used to reflexively reaching for the interest rate duration inherent in government bonds as THE hedge of choice for equity risk, implicitly assuming that highly rated government bonds are by definition a ‘safe haven’.

It’s now prudent to reconsider those assumptions in light of the following factors, which in combination are driving a stark paradigm shift for government bond markets:

Even prior to the virus, bond markets had already experienced a huge rally through 2019, while equities also reached new record highs (i.e. a positive correlation), both being heavily supported by the ‘low rates forever’ narrative.

This naturally leads to the question of how well bond markets can absorb the vast amounts of new government bond supply that is coming. Recall that when Japan was ramping up its government spending, on its way to becoming the most indebted developed economy in the world, it had a giant domestic pension savings pool to absorb it.

We are now about to see rapidly rising government debt levels at a time when ageing populations in the western world are transitioning into retirement and drawing down their retirement savings. This may mean less demand from pension savings pools to absorb all those new bonds.

Lots of new government bond supply, at record high prices, isn’t an ideal combination when demand may be waning.

“If the shutdowns of major economies go on for as long as is starting to be feared then it’s likely that governments are going to see deficits of this magnitude through fiscal injections, automatic stabilisers and loss of revenues. We would expect that the only way of calming people and markets around this is for pure helicopter money where central bank’s balance sheets balloon to absorb the increased debt. This will lead to a permanent scar on government balance sheets that were already stretched.”

This will be more of an issue in some countries than others and is highly contingent on the severity/duration of the economic disruptions to come.

With cash rates in most developed economies now effectively at the lower bound (i.e. near or even below zero) and a growing acceptance of the unsavoury side effects of negative rates, the single biggest tail wind for government bond markets – central bank rate cuts – is now pretty much done.

Of course they could keep flattening, but that is far from certain because it would require bond investors being willing to accept even lower risk premia for duration risk, despite being faced with large new bond issuance, stretched government finances, inflation uncertainty etc.

We’re at such extremes now that basic principles become binding constraints … for bond prices to keep going up, yields need room to keep going down.

The current consensus view is that inflation is dead forever. This view may be tested by the unprecedented combination of massive fiscal stimulus + ultra-loose monetary policy + risk of supply side production disruptions, that we now have.

Given the ultra-low starting point of bond yields, an unexpectedly rapid rise in future inflation would be very damaging for bond markets. This is explored in more detail below.

To put things in perspective, the chart below shows how large the government debt burden will become for the US alone. The same dynamics are set to play out in globally, to varying degrees. And this all happening at a time when the yield cushion that protects against the duration risk inherent in government bonds is extraordinarily low. Even in the US, where the FED managed to rebuild a modest yield cushion by raising rates in 2018, yields have dropped all the way back toward zero. 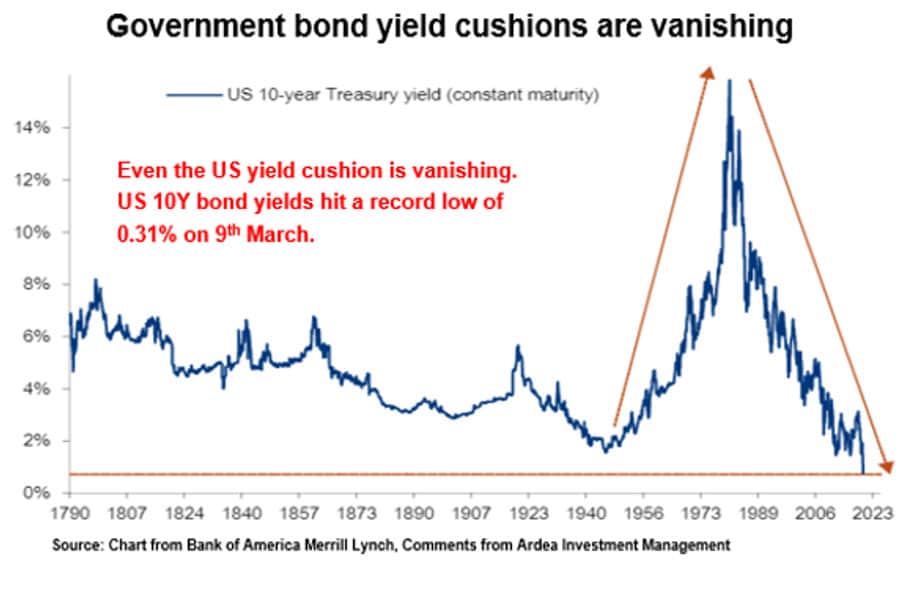 Bond yields could go negative everywhere, as they already are in Germany and Japan, but as explained earlier, negative rates seem to be falling out of favour now.

We already saw early signs of this in March:

“Global bonds plunge on fear of debt deluge from pandemic defence. European sovereign bonds led a global rout as markets braced for the kind of supply surge not seen for years, after nations from the U.K. to France and Italy unveiled plans to spend their way out of the coronavirus crisis.

Investors are pricing in the risk of a surge in government borrowing to fund stimulus aimed at offsetting the economic shock from the pandemic.”
-Bloomberg News, 18th March 2020

“The Treasury market buckled Tuesday at the prospect of a flood of U.S. spending to fend off an economic nightmare… Rates on 10- and 30-year bonds shot up more than 36 basis points, their biggest one-day increases since 1982… The surge in yields is in response to the massive supply pressure on the way, rather than any expectations for a recovery in growth or inflation”
-Bloomberg News, 17th March 2020

And ‘safe haven’ government bond prices are exhibiting equity-like volatility. For example, US 30-year government bonds have been experiencing 9% intra-day price swings and dropped 17% over 7 days in March, before partially rebounding.

Fighting against all this is and the potential saviour of government bonds is one group of enormous price insensitive buyers … central banks.

Thus, we’re set up for a 3-way showdown between the governments, who will be dumping more and more debt onto government bond markets, the private investors, who will demand higher risk premia to keep buying all those bonds and the central banks, who will need to be the buyer of last resort to prevent a violent re-pricing of bond markets (i.e. higher yields / lower prices).

The government bond markets that benefit from a high representation in reserve currency holdings have the best prospects for navigating these conflicting forces (USD, EUR, JPY), while the others could get messy. 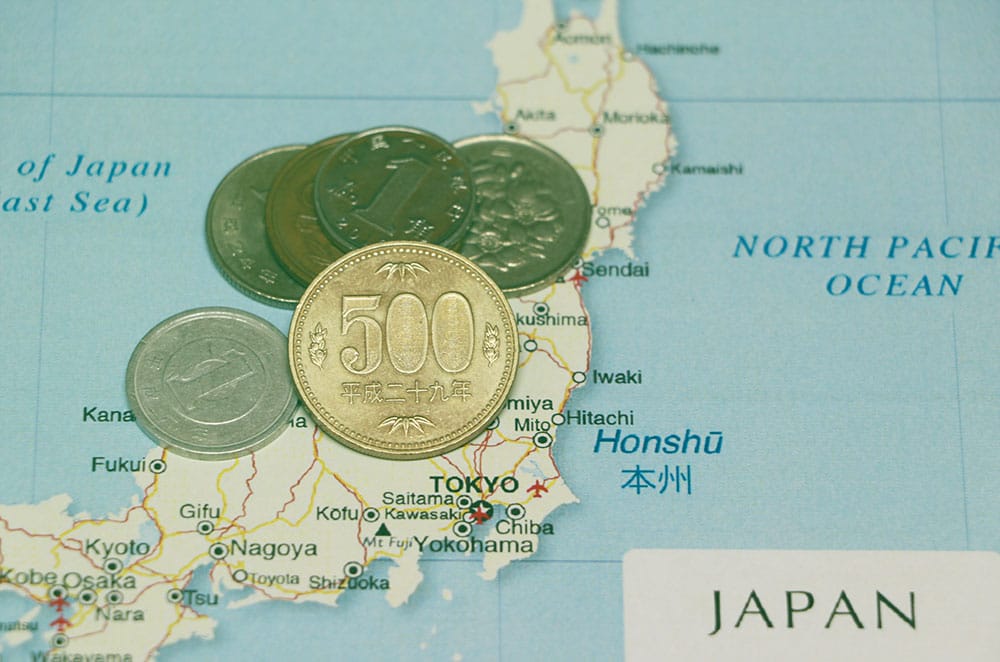 Japan provides a blue-print for the benign (at least so far) end game scenario.

Despite enormous government debt, the Bank of Japan (BOJ) has successfully kept bond yields under control via aggressive market intervention. While there is much criticism about the longer-term merits of their approach, the fact remains the BOJ has been able to keep bond yields pinned at extraordinarily low levels, while facilitating very large amounts of government bond issuance.

The question then becomes, can the Japan experience be repeated everywhere else, all at once?

Whether it’s the right approach or not in the long term, central banks will certainly try very hard to keep government bond yields pinned down. Otherwise, if bond yields were to rise a lot, at a time when inflation expectations remain subdued, the resulting increase in real yields would effectively represent a monetary policy tightening. That’s the last thing they want when governments are frantically deploying fiscal stimulus to prevent a prolonged recession.

We’re already seeing some central banks move along the path toward BOJ-style market intervention. For example, the FED has now made its QE program open ended (i.e. unlimited bond buying) and Australia’s central bank has announced an explicit target for 3-year bond yields.

How well this works as the new bond supply deluge hits remains to be seen.

A longer-term consideration is that when central banks aggressively intervene in bond markets, bond prices lose their information value, as we have already seen in Japan.

Bond market pricing normally acts as a disciplinary check on the actions of central banks and governments. For example, if monetary policy is too loose and inflation risk is rising, or if government borrowing is becoming unsustainably high, bond markets will reflect this via the risk premia incorporated in pricing.

[Also read: The Easiest Way to Invest in Bonds]

Aggressive central bank intervention dampens these pricing signals, which means inflationary pressures, unsustainable debt levels etc. can continue building up without any market-based disciplinary check. It’s therefore then left entirely up to central bankers and governments to control themselves.

How confident can we be that a small group of powerful policymakers with little real-world accountability, can walk the delicate balance between too much or too little policy stimulus?

Of course, the policymakers would like us to believe very confidently in their abilities.

The ultimate test of belief in central bank credibility may well be the end game we are heading for – debt monetisation.

This seemingly innocuous technical term is in fact loaded with all kinds of scary connotations as it refers to the controversial idea of central banks explicitly financing government spending by printing money to absorb extreme levels of government bond issuance that markets wouldn’t be able to digest (at least not without yields rocketing higher).

This is controversial because of the fear that it could eventually lead to economic carnage via hyperinflation, sky-high interest rates and loss of confidence in currencies a la Venezuela, Zimbabwe etc.

Again, it is those countries whose government bond markets have a high representation in reserve currency holdings that can navigate this best.

This is part of the article “Fiscal is the new black (… until the bond vigilantes return) and was originally published in March 2020 by the Ardea Research team.

Ardea was established to provide clients with a unique fixed income alternative. They are focused on generating consistent returns for investors.